Mexico is a land with a vibrant, colorful and unique nature with varied terrain ranging from cactus-studded deserts to the white sandy beaches and blue waters, tropical rainforest and jungle-clad hills to steep rocky canyons and narrow gorges, and from snow-capped volcano peaks to bustling cities. Located in the Central America, bordering the Caribbean Sea and the Gulf of Mexico, between Belize and the US and bordering the North Pacific Ocean, between Guatemala and the US 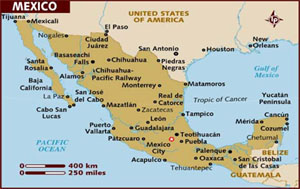 Since the height of Mayan and Aztec civilizations, Mexico has suffered the destructive force of the conquerors, the European colonial rule, civil and territorial wars, rebellions, dictatorships, recessions and earthquakes. The countryside remains un-spoilt by development, and its cities display a unique style of architecture. The extraordinary history is reflected in the ancient Mayan temples spread across the jungles and ruins of Aztec civilizations, rural indigenous villages, Spanish colonial cities and silver mining towns, and traditional Mexican ports.

Buildings display a unique combination of colonial and pagan architecture, blending together Art Nouveau, Baroque, Art Deco and Native American design into the structure of their churches and public structures. The country's culture displays a similar blend of the traditional and modern, where pagan meets Christian in a series of festivals, or fiestas throughout the year. 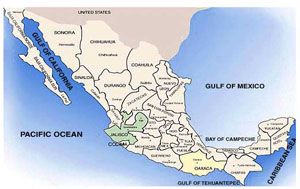 Mexico's Capital City, often referred to as just "Mexico" by people living in the country, and is one of the world's most populated areas with an estimated 22 million inhabitants living inside an area of 750 square kilometers.

Mexico City is situated over 2,250 meters (7,400 feet) above sea level and watched over by two mighty volcanoes. It is one of the oldest cities in the world. Originally a "floating city", served by a large and complex network of canals when it was the epicenter of the Aztec empire; today, the nation's capital is one of the world's most populous mega-cities on our planet.

A restored ruin of the most important temple of that ancient city, Templo Mayor, can be seen today in the archaeology park next door to the Cathedral in the heart of the historical center: the rest of the architecture in the old city downtown has a distinctly Spanish feel about it. 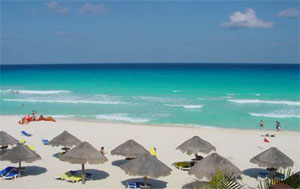 Mexico City is the center of government, business and culture in Mexico. Over one-fifth of Mexico's population works lives and plays here. The city never seems to sleep and the omnipresent energy is one of the big attractions of this metropolis.

Monterrey, Mexico's modern-day commercial and industrial powerhouse is also third largest city, is set in the spectacular Sierra Madre mountain region of north-west Mexico. With a population of almost three million residents many of Mexico's biggest companies are headquartered here; it is also a huge area for maquliadoras, factories where goods are assembled, often from foreign components, to be exported once again for sale in the USA, Europe and Asia.

Guadalajara is Mexico's second largest city situated in the state of Jalisco. Guadalajara is an important city colorful and vibrant, with 5 million inhabitants; it is also one of Mexico's colonial treasures.

Guadalajara is often described as the "most Mexican of all Mexico's cities", partly because the culture here is traditionally Mexican. It has all the amenities you would want from a large city in Mexico: Colonial center, great art and culture, good shopping, great restaurants serving a huge variety and choice of delicious food, excellent choice of accommodation options, and a vibrant nightlife - without the pollution, severe traffic headaches and other associated side-effects of Mexico City.